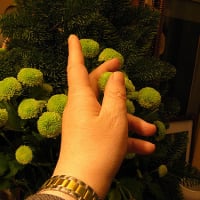 Two persons in their forties meet by chance abroad in the hotel lobby. They were schoolmates. Now one is a successful business person while the other is a botanist working for a state conservatory.