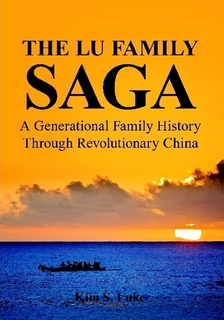 The Lu Family Saga is an autobiography of a young girl whose great-grandfather, Lu Haodong, plotted alongside Dr. Sun Yat-sen to overturn the feeble Qing Dynasty, the last of the Chinese Dynasties. During the Chinese Revolution, Lu Haodong made the supreme sacrifice for the love of his country – at the age of 27, Haodong died a hero, and his comrade Sun Yat-sen became the Father of Modern China. Generations later, the girl was born into a world still in turmoil – living through WWII, the Japanese invasion, and the civil war in China. Under the Communist leader Mao Zedong, she and her family struggled, suffered, and survived the Social Revolution, the Land Reform Act, and the Great Leap Forward movements. In the Summer of 1959, she broke free from her hopeless life in Southern China in a desperate escape. Over a decade, every member of her family risked life to escape from China – the very motherland for which her great-grandfather had fought so dearly.